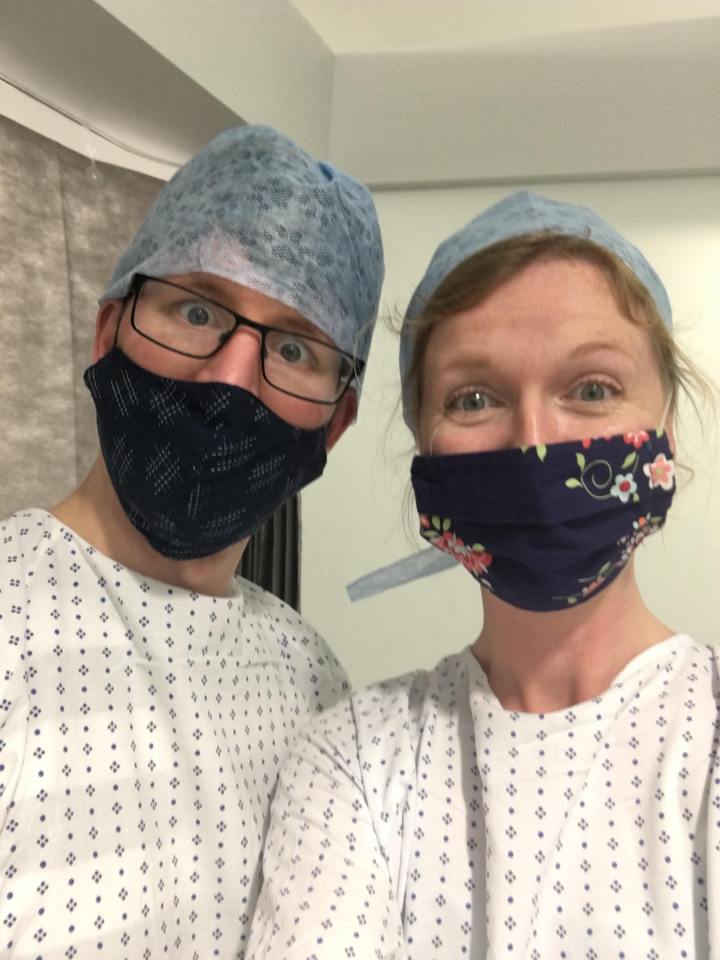 After weeks of medication and scans, we found ourselves anxiously waiting to drive to our clinic.

Whilst walking Crumpet in the morning, my phone rang in my pocket. My heart skipped a beat, and my stomach dropped.

We were told that if we didn’t hear anything from the embryologist, this was good, and that our embryo was ready for transfer. Hearing from them this early in the day could only be bad news.

When I pulled my phone out from my pocket, I saw my mum’s name flashing up on the screen. Half relieved, half still anxious, I answered the phone and told her that I was too nervous to talk.

The rest of the morning passed, and we get in the car and headed off to our clinic. This was our first embryo transfer since Cecil & Wilfred, and only our second transfer in total.

After one egg collection where we were late by 10 minutes due to terrible traffic, I now make sure we arrive at our clinic extra early. We had planned that we could wait in the coffee shop, and treat ourselves to a drink, whilst I filled my bladder up ready for transfer. We sat and watched other couples coming into the clinic, and wondered if we would be returning in a few weeks for a scan of our next baby.

When our time came, we headed upstairs, and were shown into our cubicle. We were both instructed to get changed, which James found very entertaining. At our previous clinic, for transfer we both wore our regular clothes, so he found this a huge novelty. After some interesting poses from James, we were taken into the transfer room.

The transfer went smoothly, and we left clutching a photo of our embryo which was nestled safe inside me.

Nearly two years after our only day 5 embryo that became our sons was put back, we now had another embryo on board.

I can hardly say I’m an expert at the two week wait. Having done six rounds of IVF, this was only my second transfer.

The first week passed without too much to say. I felt lucky, with Cecil & Wilfred I didn’t have any symptoms, so I knew not to symptom spot this time around. The medication can mimic pregnancy symptoms, but knowing I didn’t have any last time when there were two little babies in there made me feel a lot better.

Day 7 of the two week wait was when I started to mentally struggle. I started to get some mild cramping. I searched through my diary and notes from my last transfer, and noticed that I had written that I’d felt exactly the same thing. I wasn’t sure whether to feel worried by the cramping, although it was incredibly mild, or whether to feel excited. I’d had the same cramping last time, and it turned out I was pregnant. Perhaps this was a good sign?

In my last two week wait, I didn’t have any break through bleeding, but due to the cramping I became convinced I was going to start bleeding. I wasn’t even sure we would make it to test day, as I was so convinced that my womb was about to give up on me. I was obsessively checking my knickers for signs of bleeding, and I imagine it was difficult for James to be around me as I was so nervous and emotional.

The days where I wasn’t at work felt torturous. I didn’t have enough to distract me, and can honestly say that the two week wait was harder than doing four rounds of IVF back to back. I found it so incredibly difficult to make it through each day. I know that sounds dramatic, but my brain really was my own worst enemy.

Towards the end, I really began to doubt whether I could carry on. I just wanted to be put out my misery.

James never wants to test early, so I held out until test day. This wasn’t our best quality embryo, and although the realist in me thought it was unlikely to work, a small part of me was hopeful for a nice surprise.

After spending hours trying to get to sleep, I woke up at 2am on test day, and laid there as the seconds and minutes ticked past. When it got to 4.30, I couldn’t hold it any longer, so I woke James up and headed off to the bathroom to test.

Three minutes later when I went back to the bathroom, a stark negative test greeted me. The space where the second line should be looked empty, much like the contents of my womb.

Completely exhausted from two weeks of mental exertion, I climbed back into bed and finally fell asleep.

I can’t say that I feel particularly upset over the negative result itself. I’ve seen plenty of negative pregnancy tests across the years. Instead I grieve again for my perfect little boys. I mourn for the life I am missing. The emptiness inside me felt particularly obvious when I knew there was no baby snuggled up inside me.

I’ve had some low moments, whether I question whether we will ever become parents again, but I then think about the five embryos we have waiting in the freezer.

5 chances still remain, and I am always hopeful that one of those will be our take home baby, and a sibling for Cecil & Wilfred.